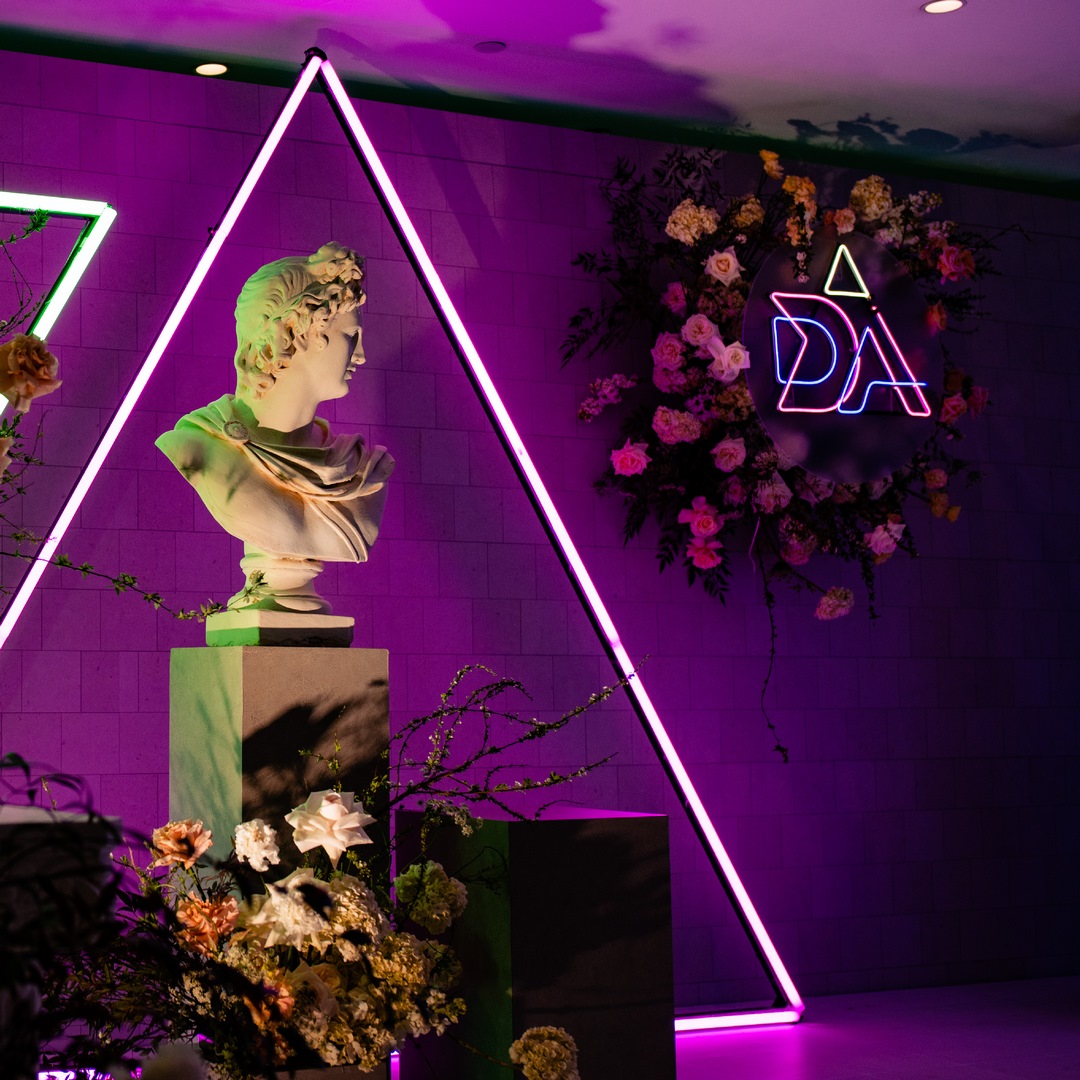 There is an interesting fact that makes us wonder: “Why are the brides who competed in beauty pageants so charismatic?” Contrary to popular thought on her, Thuy An, the runner-up of Miss Vietnam 2018, had aspired to a wedding concept made out of a variety of hard materials for her special day, instead of a venue full of flowers. 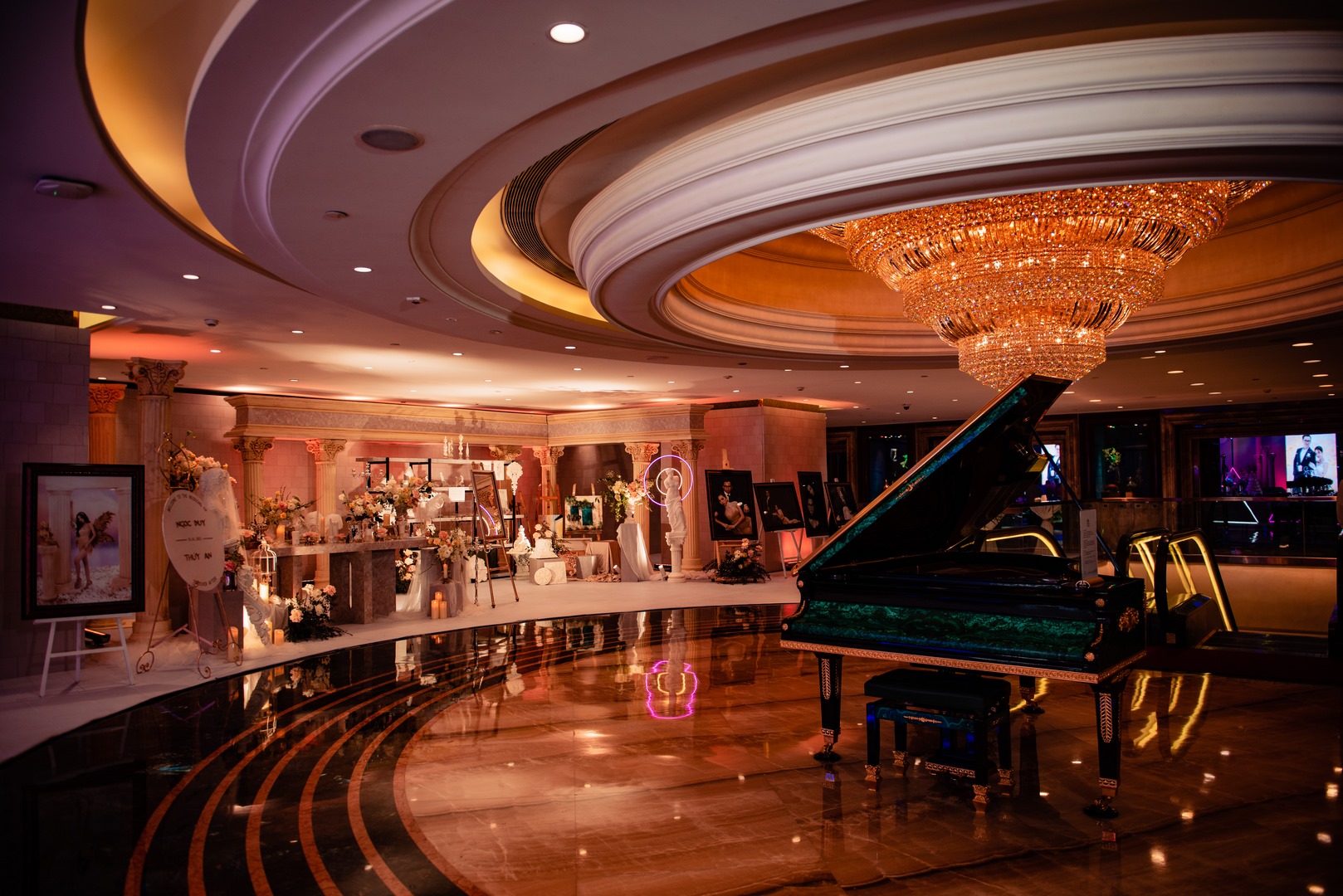 It is hard to deny Olympus – The Land Of Love is one of the most time-consuming wedding concepts of Je t’aime Art in 2020, due to encompassing a wide variety of art styles: Greek Mythology – Renaissance – Contemporary – Installation. 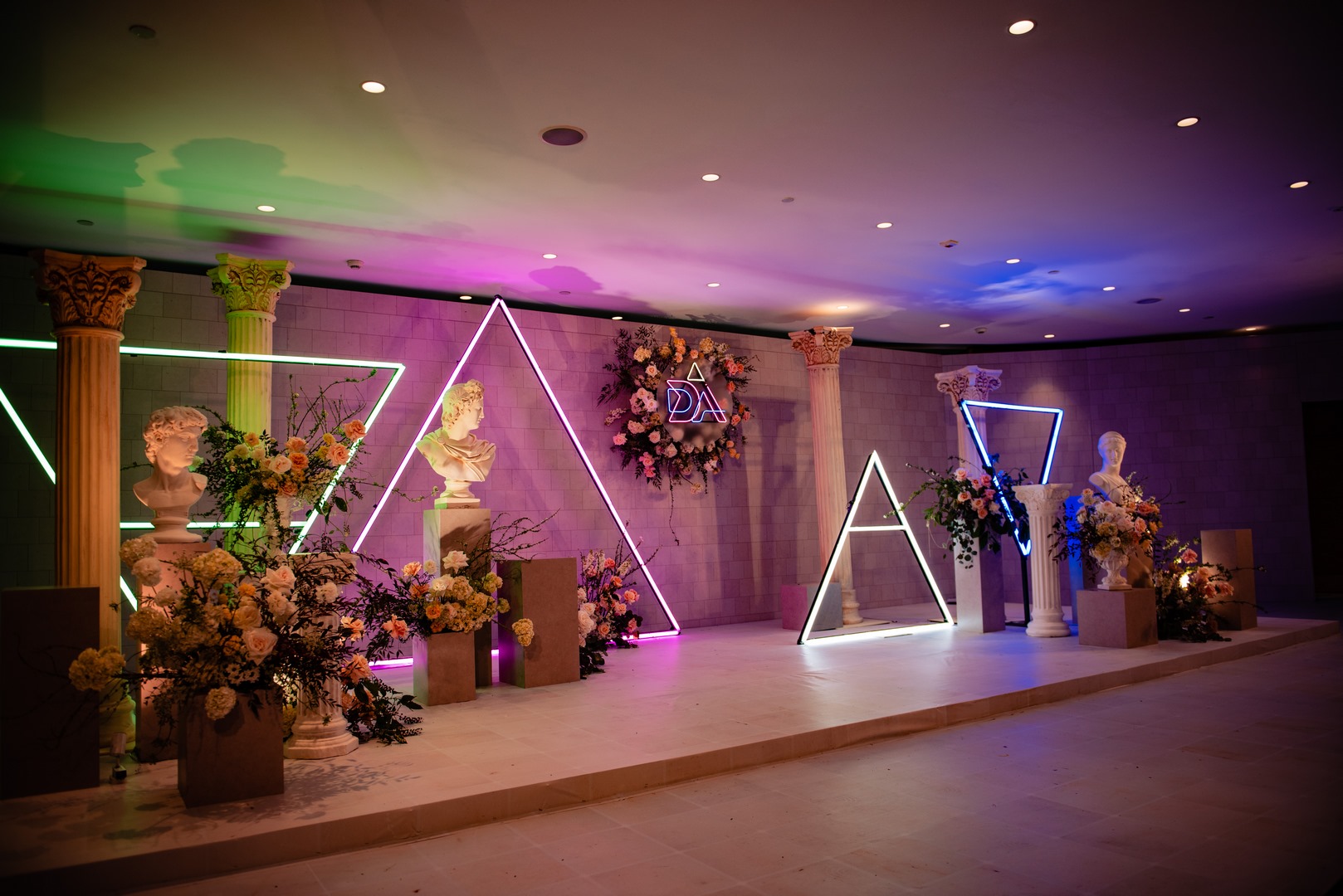 In Greek mythology, the way Gods create the world and humans has an extensive influence and are mysterious stories that fascinate readers. Je t’aime Art recreated the wedding venue as the residence on Mount Olympus where the bride and groom got their blessings from the deities.

Using brilliant sound effects, lighting and visual technology to touch up the venue more fancifully when lights dimming and also, make the emotional wedding moments of the couple more concentrated. 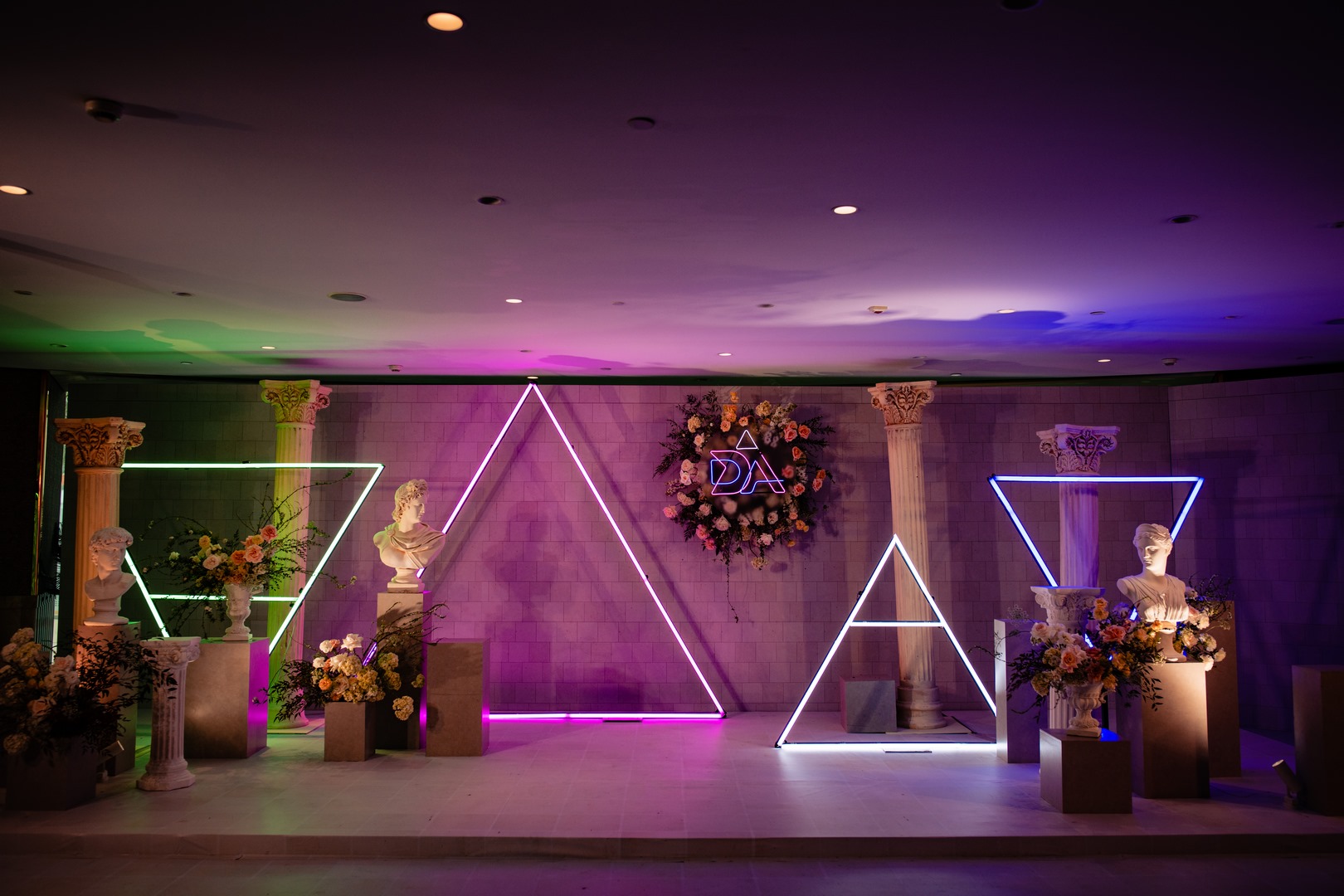 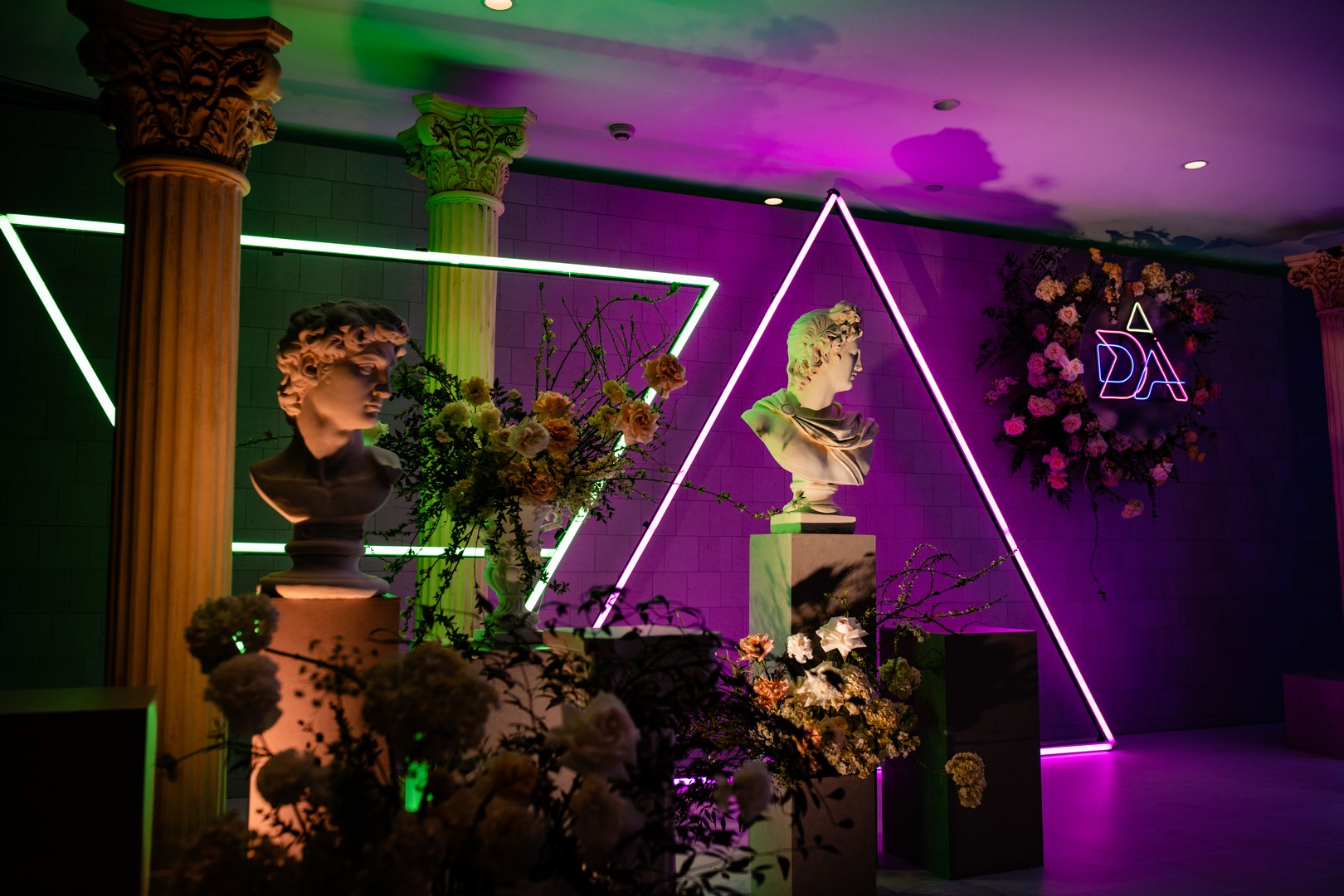 During this concept implementation, we were carefully researching the interior layout of Reverie Saigon Hotel to organize and arrange our decorative pieces in style. Starting with Foyer, we had to deal with the task of making an open area show its consistency in the concept to present as a corner in the art museum where it exhibits precious love memorabilia of the couple. 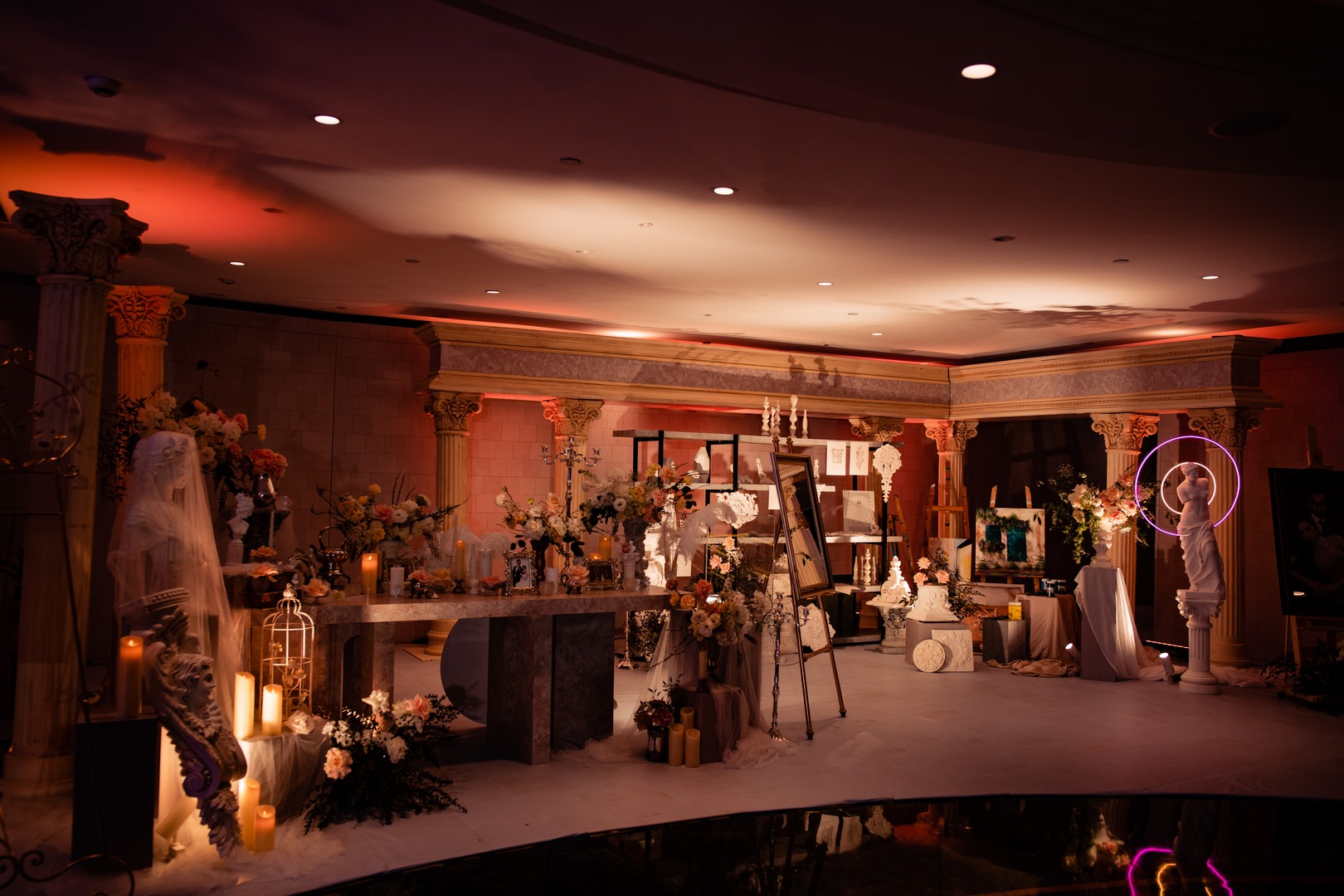 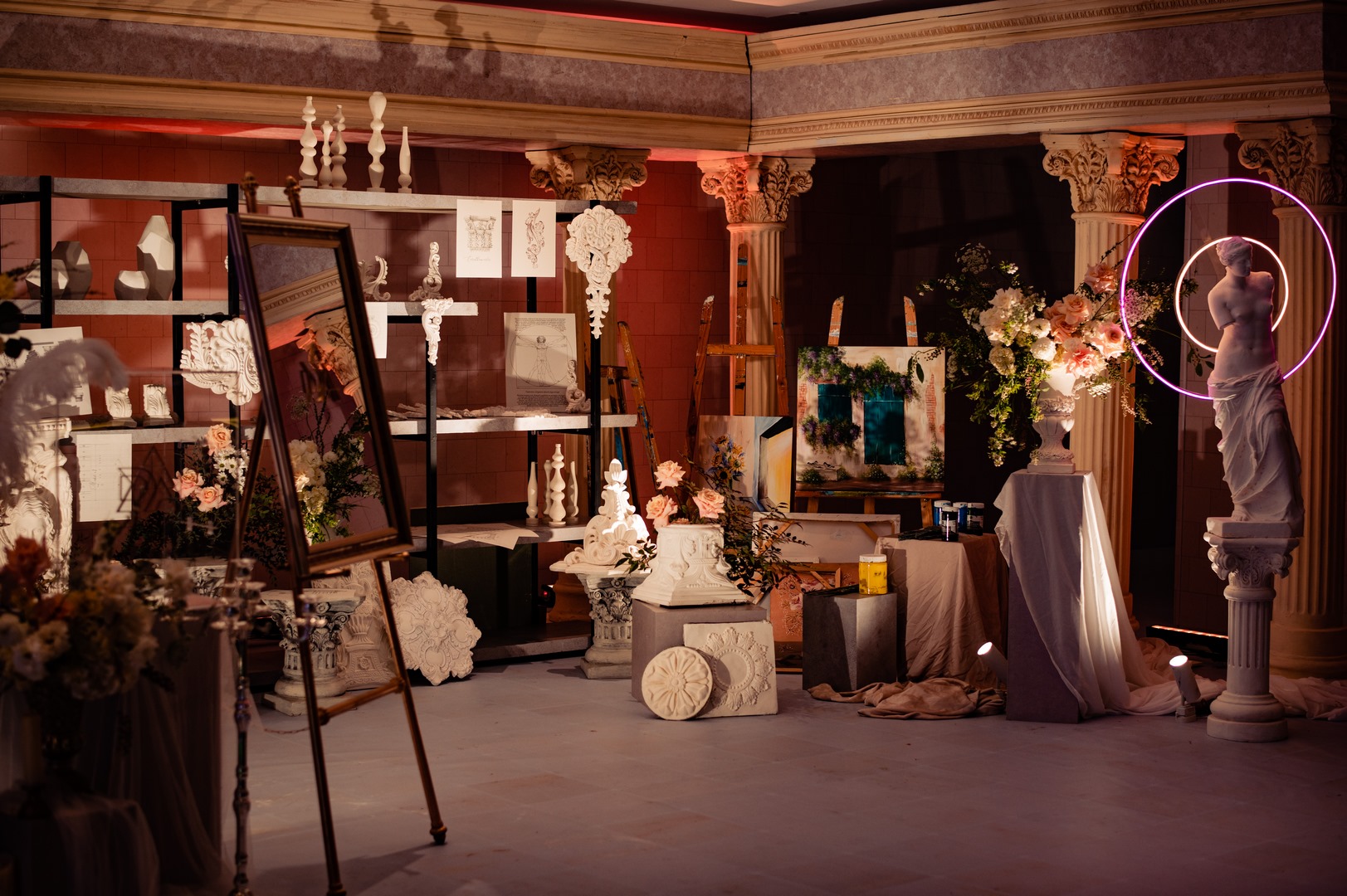 In order to do it, in addition to limiting plaster walls for space dividing, our design team put distinct features of Renaissance architecture in our construction. Such as marble tables, square shaped blocks, Roman type columns carved with ancient motifs… and arrange the statue in symmetry. 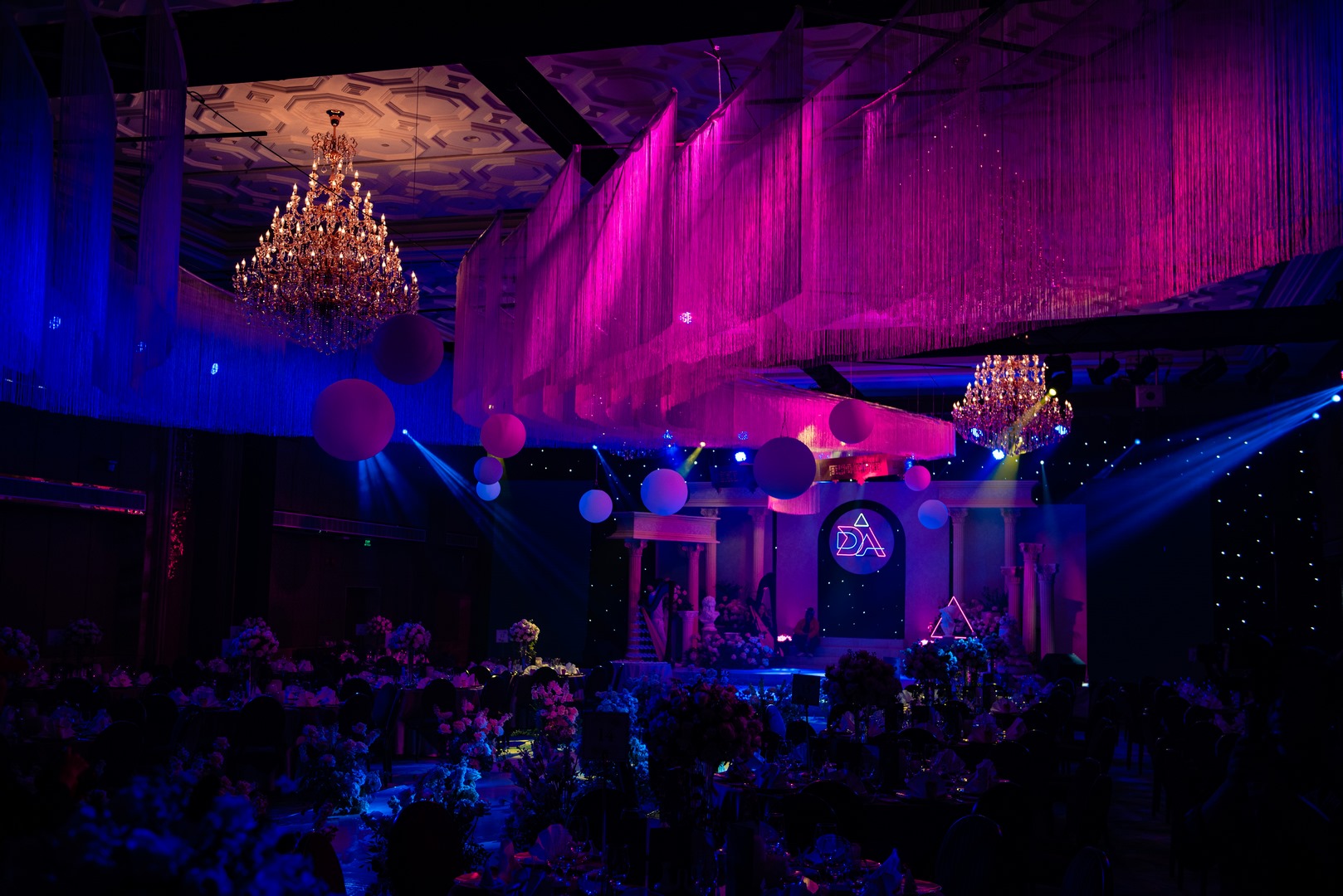 Besides Renaissance Art, we exploited the Installation Art by expertly transforming original elements of nature: SPIRIT – FIRE – AIR – WATER – EARTH, to create an invariant universe of which the bride & groom is at the center. Their love is a representative of SPIRIT – the highest element in the elemental pentagram, the “golden ratio”, the eternity, and the epitome of God’s creation. 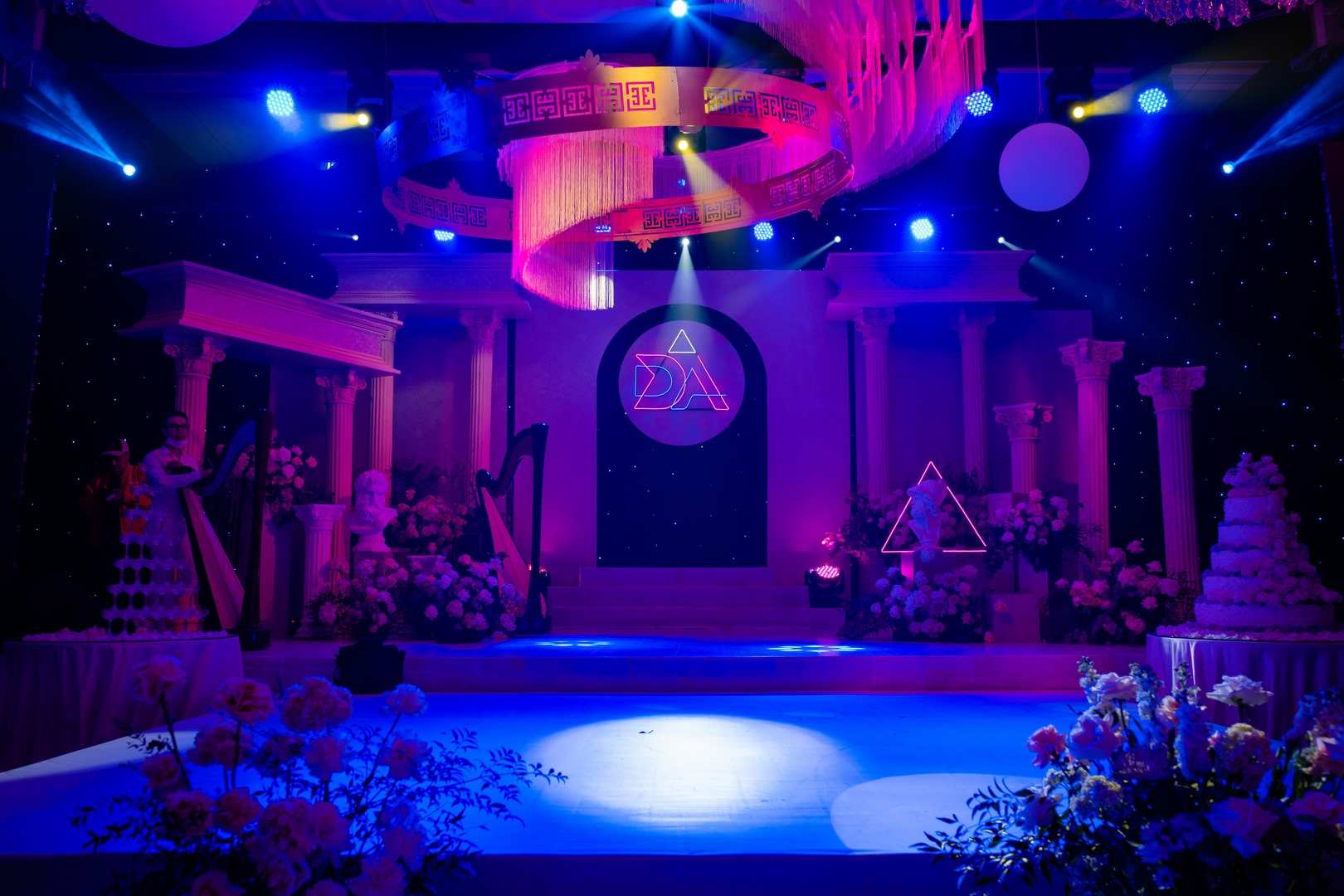 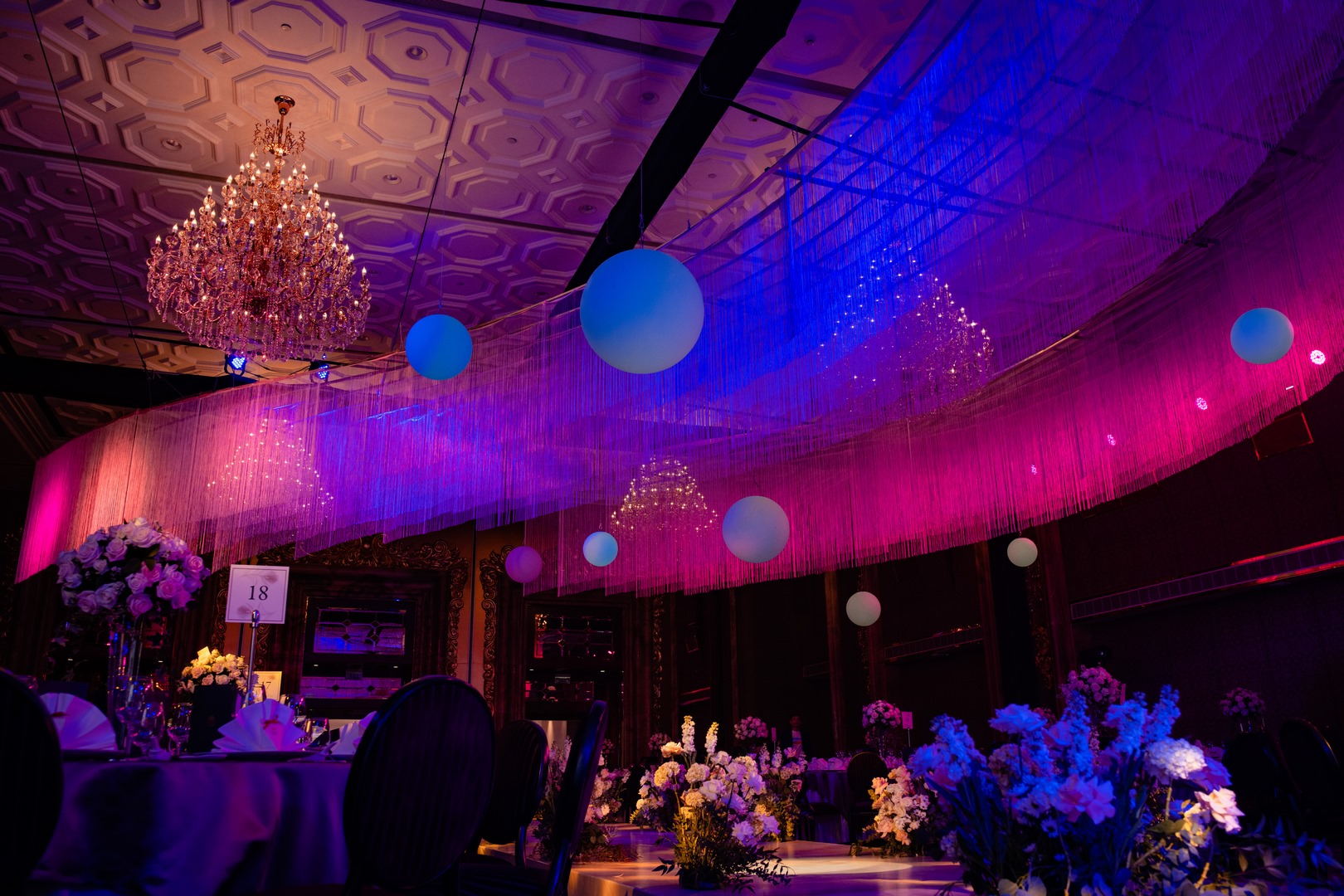 Applying Installation Art, the Backdrop became a surreal space where the elements appear in form of the “golden ratio”. Following the golden spiral, the symbol representing the bride & groom was located in a perfect “eye” position. It was shown through their initials, and put in the floral wreath as a circular pictorial representation of SPIRIT, which is the connection between the two souls becoming eternal. 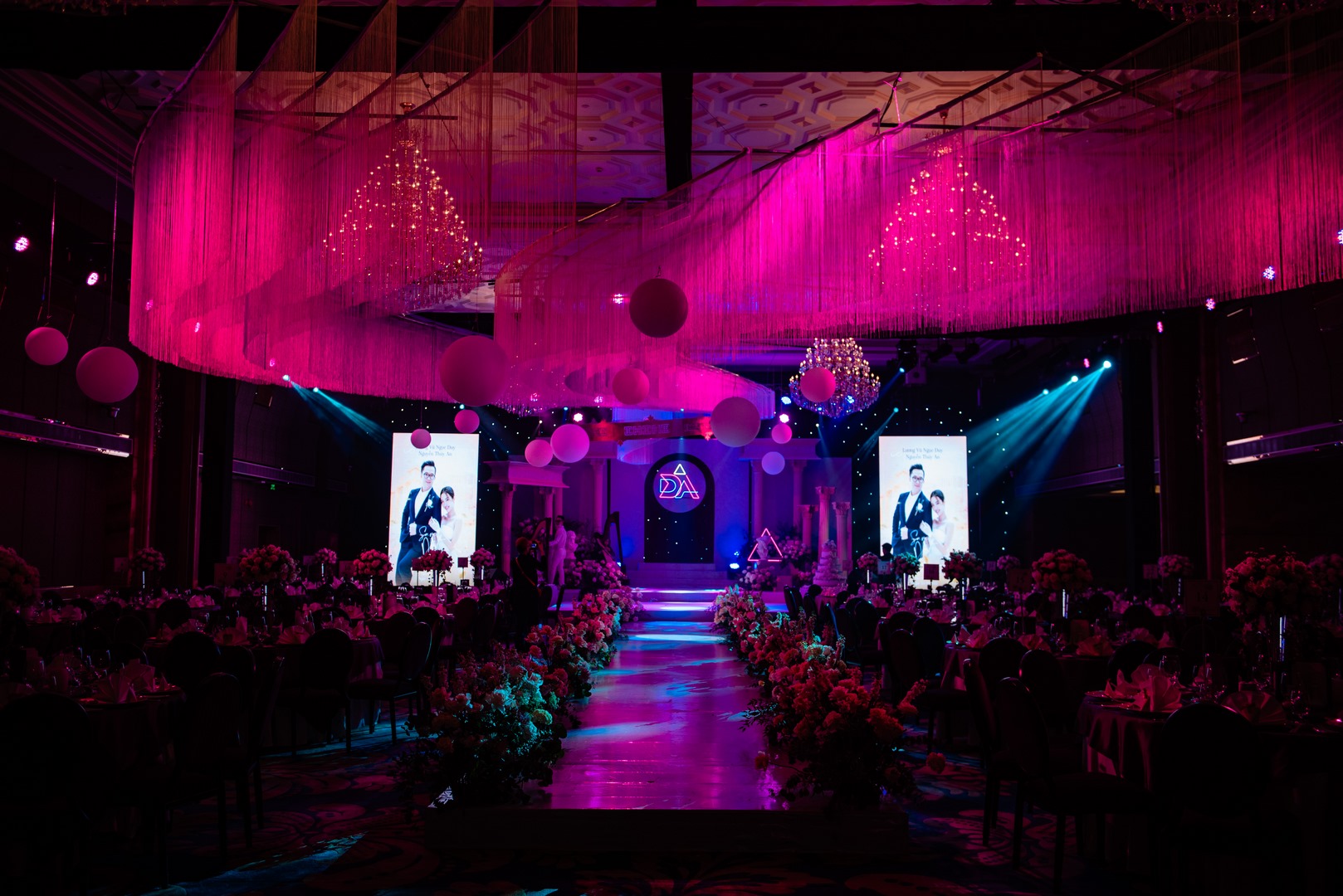 As other soon-to-be brides & grooms, Linh - Di also met with difficulties while preparing for their big day despite...

The wonderful thing when planning a decades wedding anniversary is that we have the opportunity to immerse our souls in...