You Are My Universe 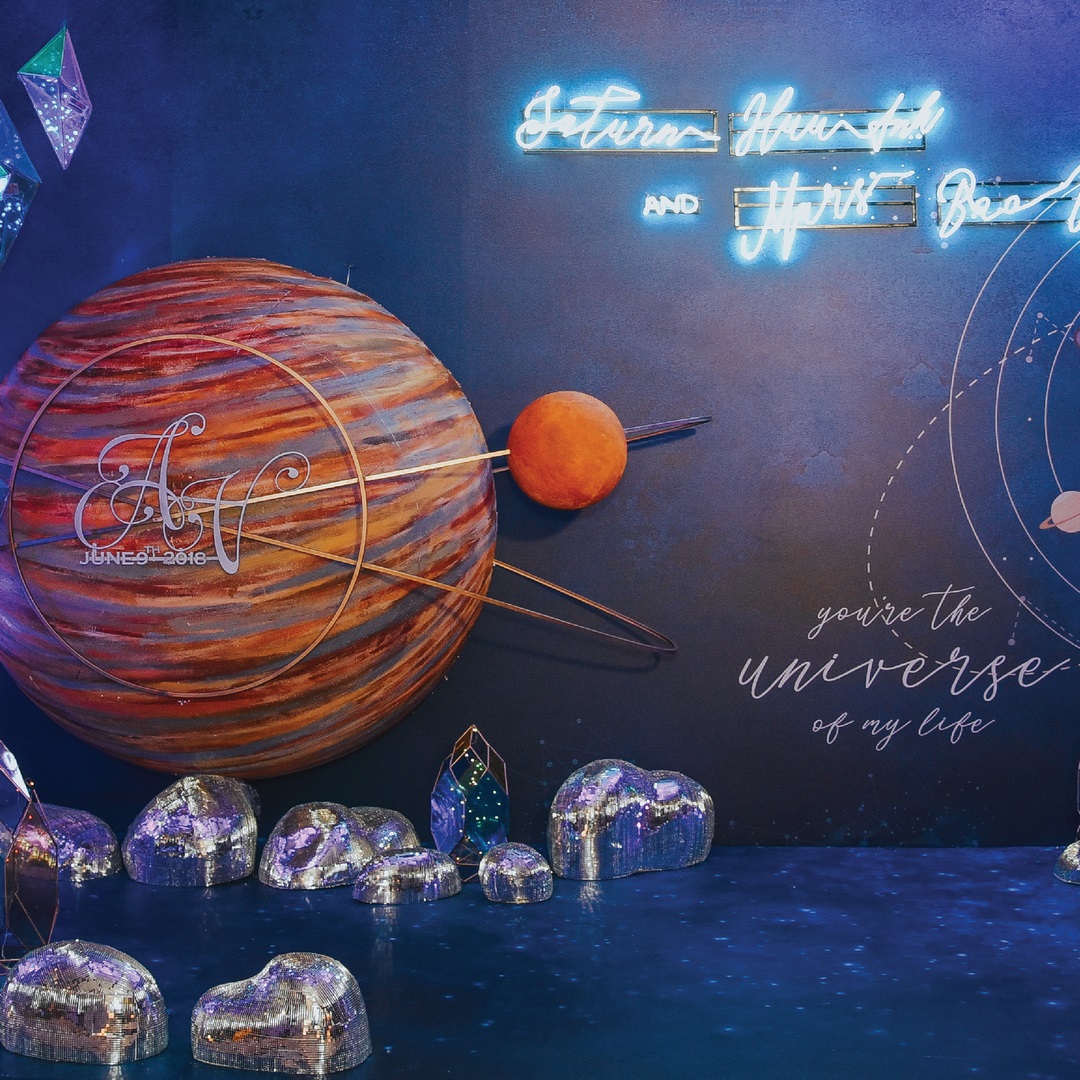 You Are My Universe

The idea of ​​You Are My Universe was inspired by the love story of Huu Anh, whose element is Earth and Bao Vy, whose element is Fire. Therefore, their big day is the day that the two planets – Saturn & Mars merged into one new planet which is an opening of a new era of happiness.

(Fact: The Earth (as a Wu Xing element) and Saturn are homographs in Vietnamese language, which is “Tho”. That is the basis of how we came up with this idea).

Mother Tree, a symbol for beginning, the hub of love

Right on the aisle, Mother Tree appears magnificently with the crystal clear foliage and cosmic clouds surrounded. Mother Tree, a symbol for beginning, which is the root of all things in the universe, the hub of love, the birthplace of love of the King of Saturn and the Queen of Mars. Therefore, the couple decided to choose this place to exchange their vows in front of the witness of everyone.

With the meaning of the beginning of life and the hub of love from Mother Earth, the process of building Mother Tree requires particularity and meticulousity in the production of materials, especially the making of “the trunk” by bending iron wires and pressing purple and blue gradiented mica panels. In this stage, Je t’aime Art’s technical team had to spend a lot of time researching on colors and chromas in such a way that the pieces would create a uniquely “sparkling” and “magnificent” effect of a creature living in outer space when combined together. 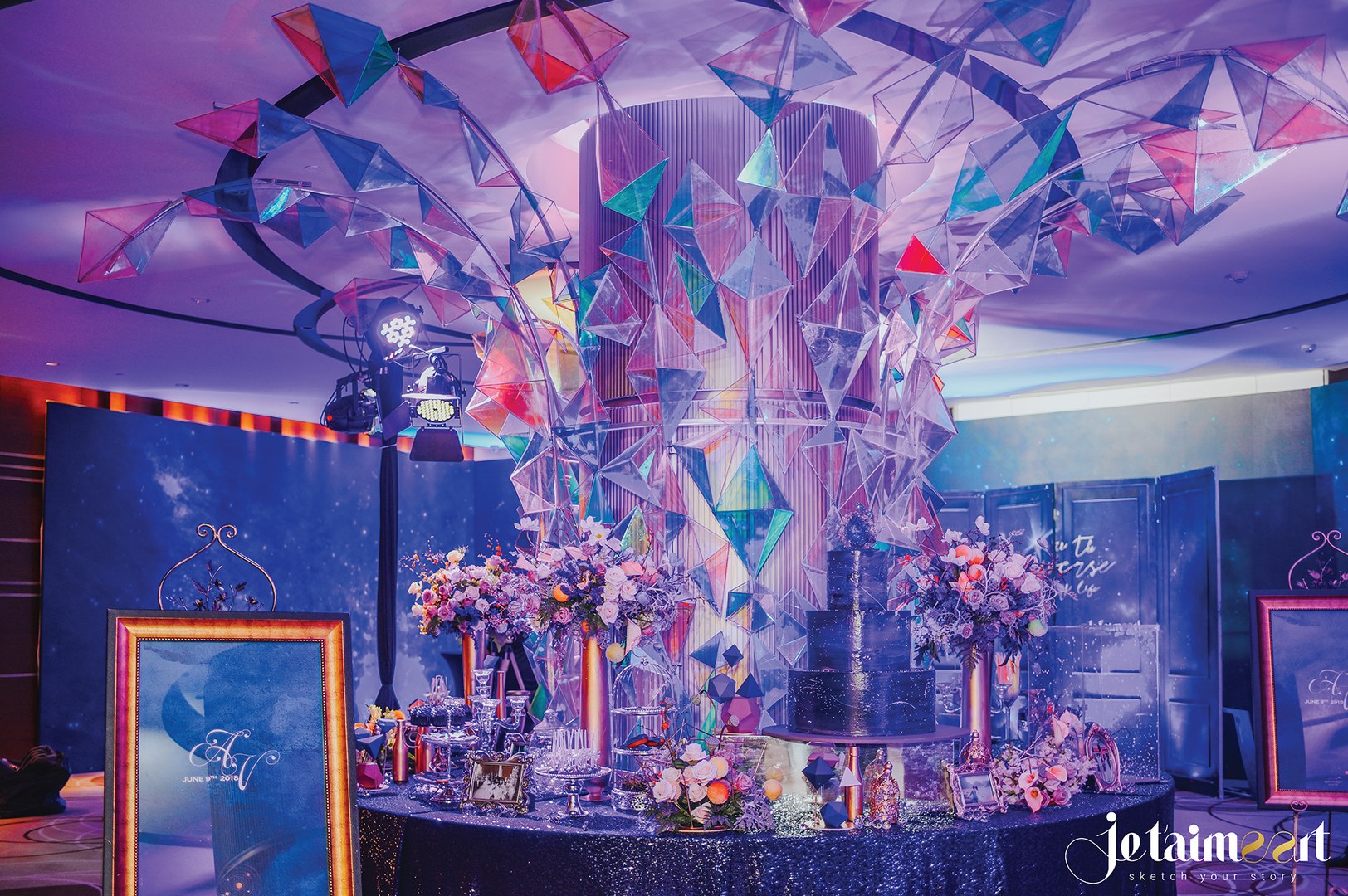 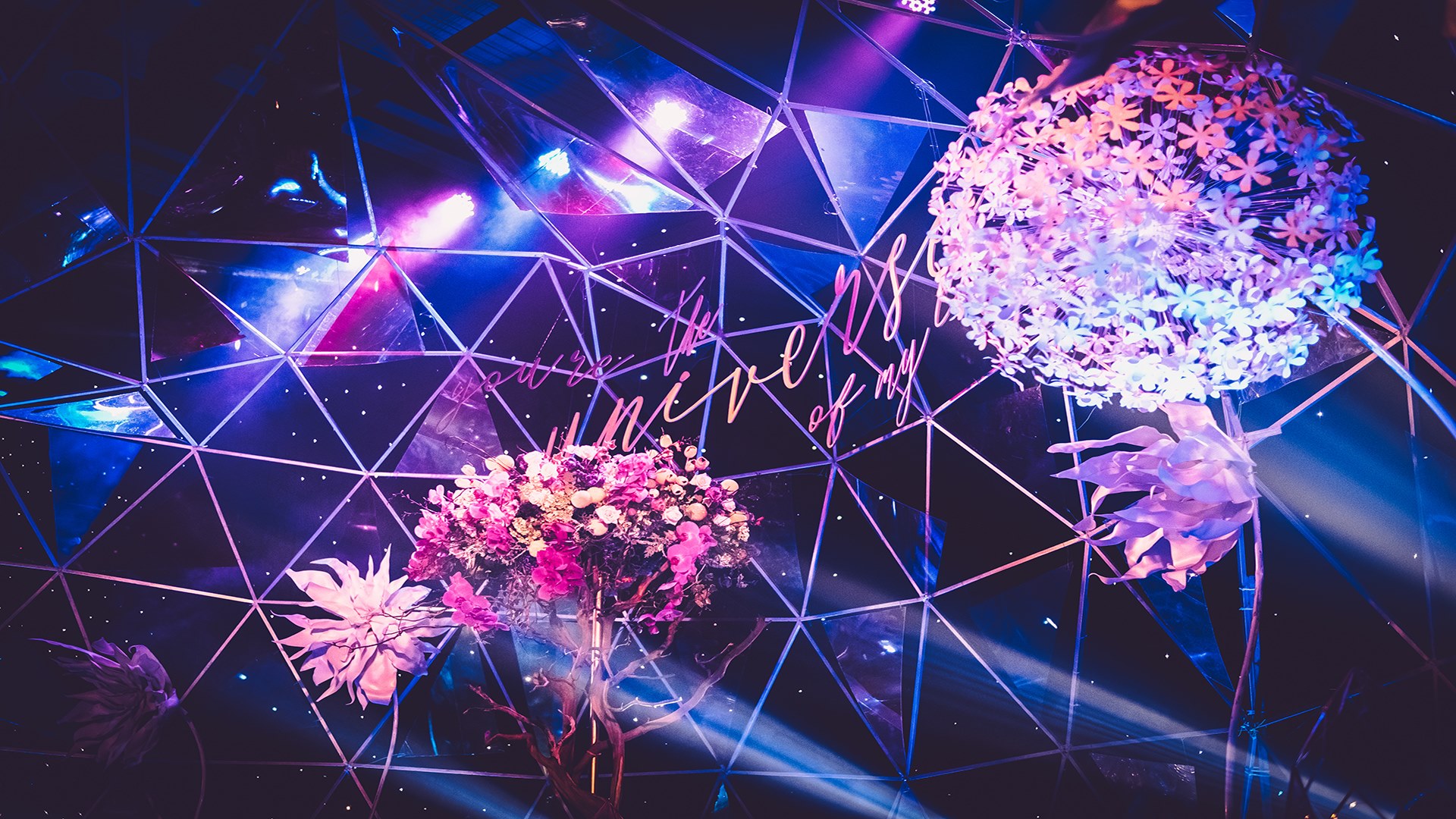 Using the Color of the Year for 2018 – Ultra Violet as leading color, The space of You Are My Universe from the backdrop area simulating the surface of the planet to the sparkling memory table and the photo booth area, are covered by the trending color which is a beautiful gradient of purple and blue.

One special thing about You Are My Universe is that we did not choose flowers as the main material for decoration, but we coordinated flowers and mica and glass instead. Along with the properties as light catching of mica and sparkle of glass, flowers are covered with luminous paint to create a visual effect in the space covered by the star curtain as well as to highlight the stage designed as a glowing crystal planet. It is the one which was created by the “collision” between Saturn and Mars. A beautiful new planet which is full of blooming flowers. 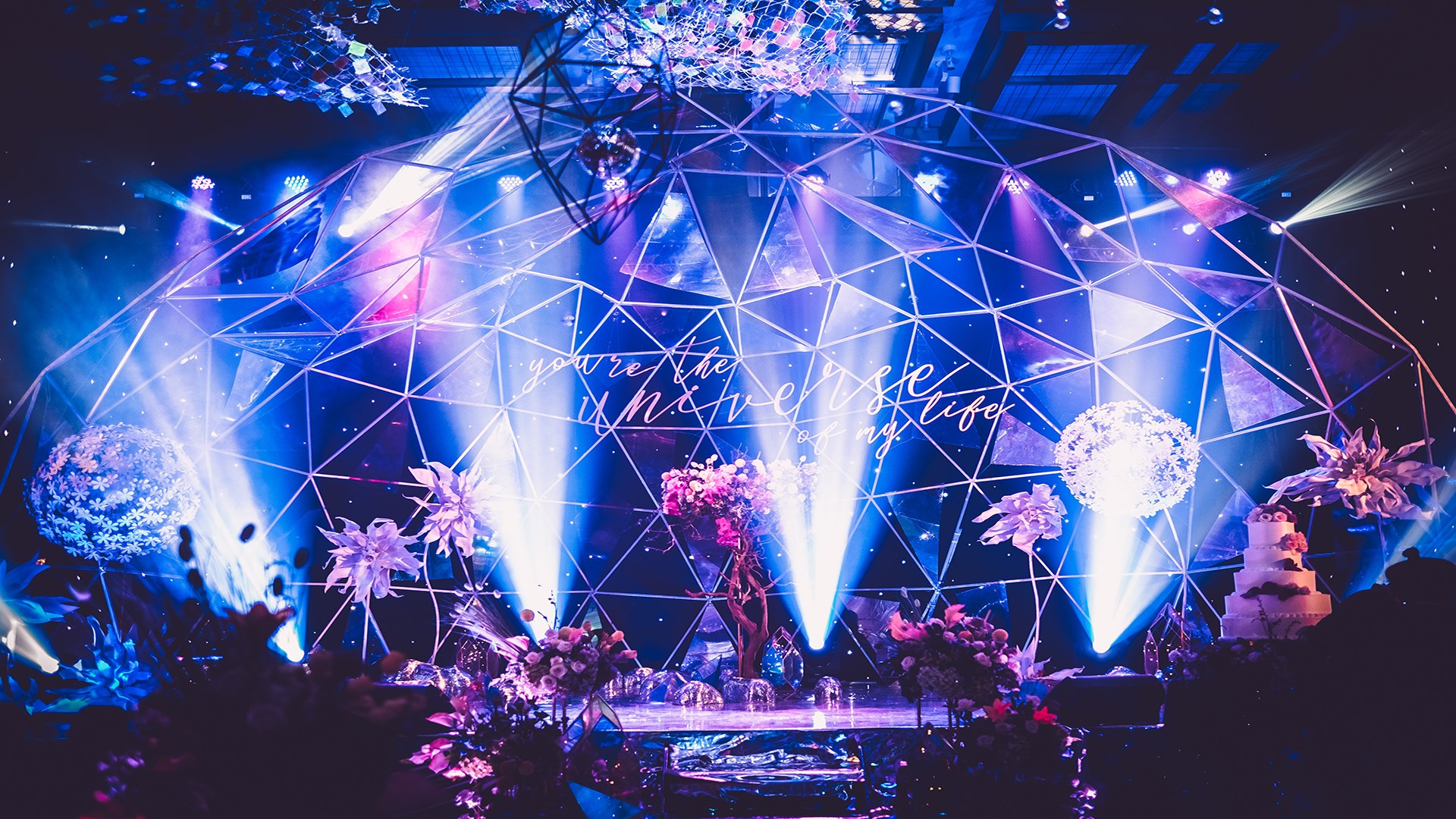 If you have talked about You Are My Universe and Mother Tree, you never want to miss the fantastic Galactic Sky spread across the ceiling, which contains hidden secrets of the mysterious universe. Had the guests look up at the air and be amazed by its incredible look, but Je t’aime Art’s designer team and technical team actually made it out of… tons of B40 nets! We bent each wavy line of the cosmic cloud, which is the steels actually, gently and carefully in such a way that creates the effect as vivid as possible. At the same time, the gradient mica pieces which had been cut and pressed to each tiny frame of the cosmic cloud, significantly turned the sharp and rough fence into a fanciful Galactic Sky to bring all the guests to an overwhelming space trip that they will never forget! 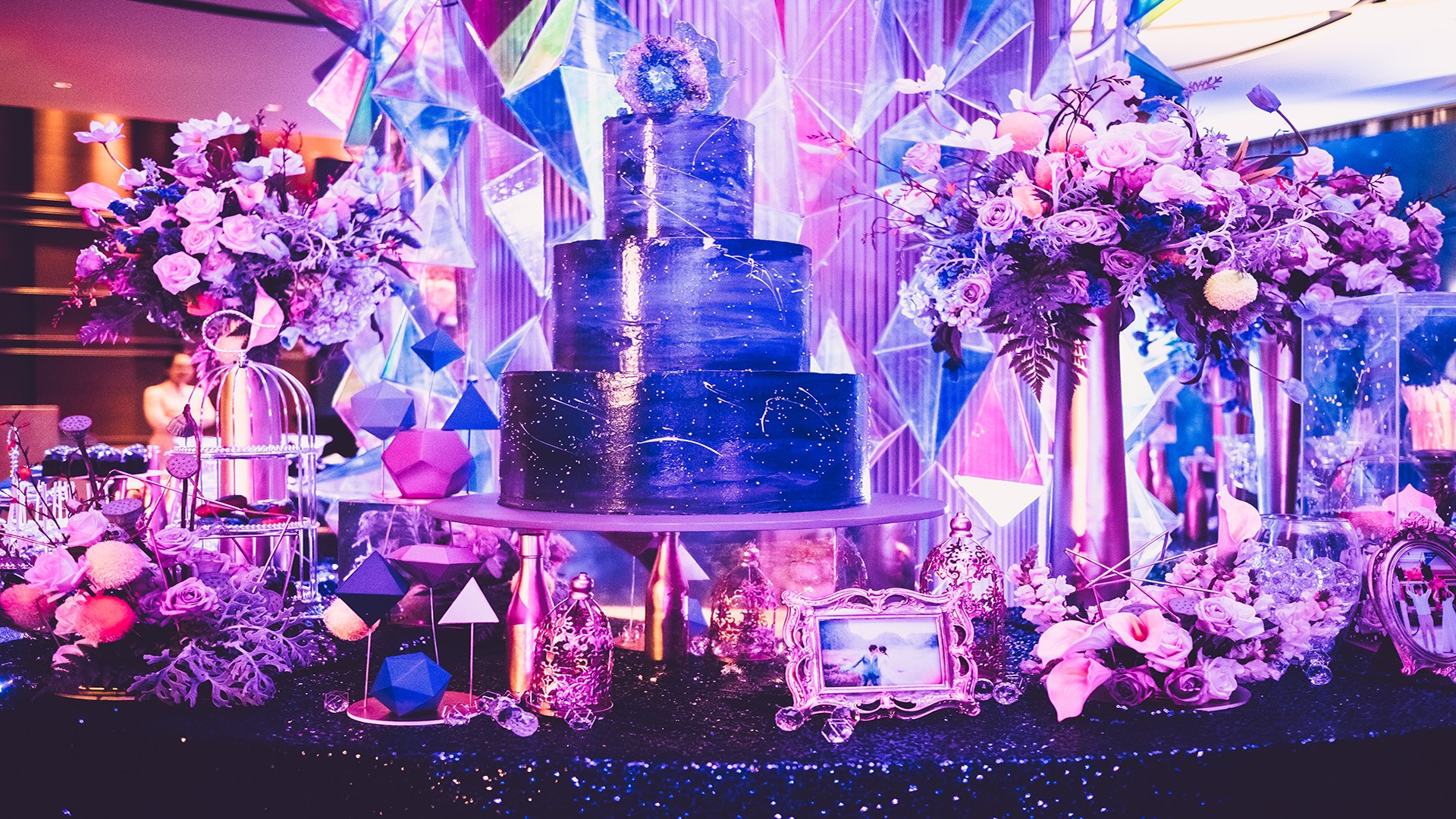 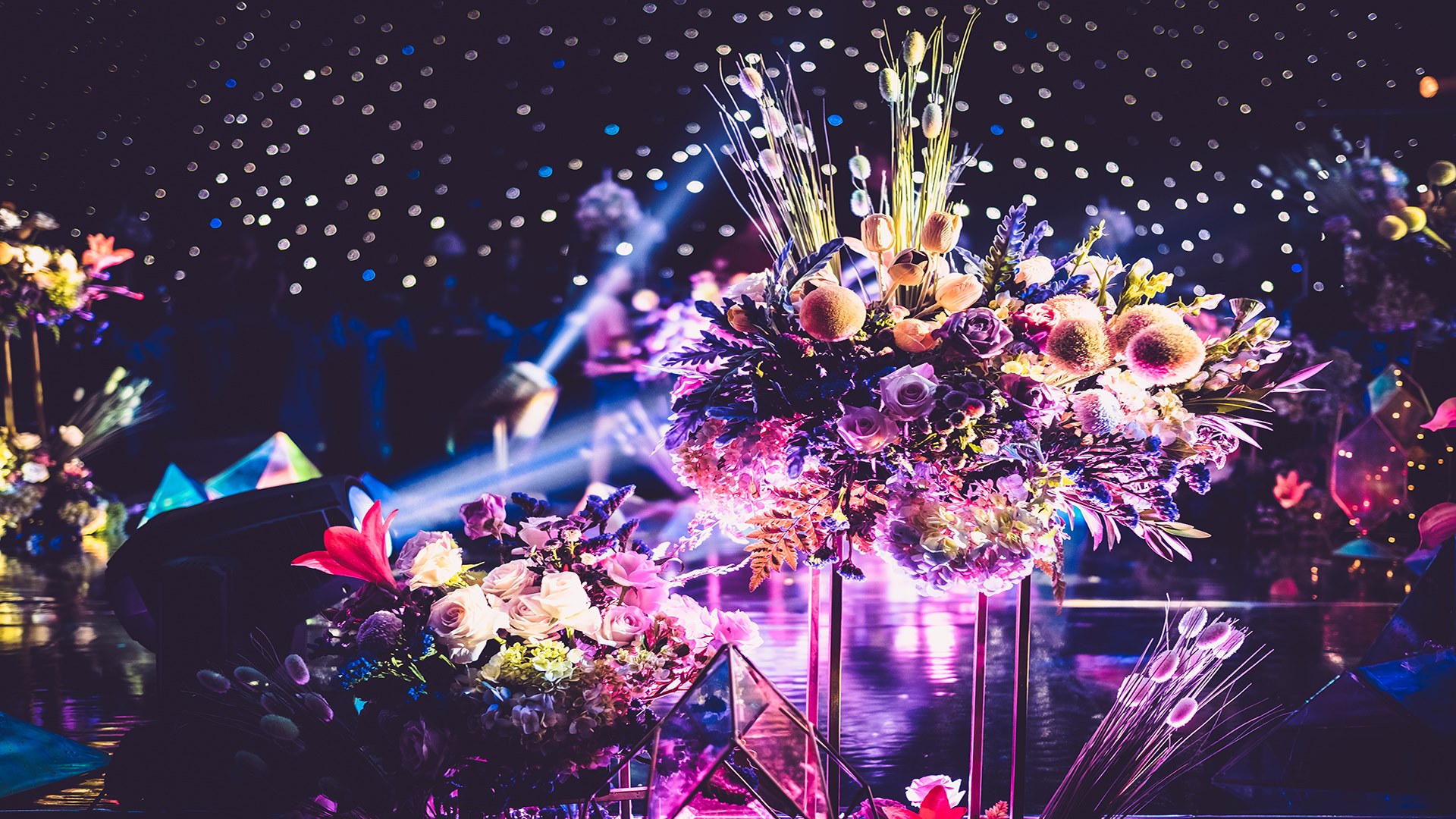 There is an interesting fact that makes us wonder: “Why are the brides who competed in beauty pageants so charismatic?”...

As other soon-to-be brides & grooms, Linh - Di also met with difficulties while preparing for their big day despite...